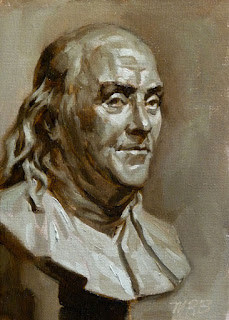 Benjamin Franklin (1705-1790) went to Europe in 1776 to negotiate a treaty of alliance between France and the United States, and remained as the new nation's Minister to France until 1785. Through their fraternal and social activities, he became acquainted with the sculptor Houdon, who recorded in this portrait the statesman's thinning hair, sagging chin, and expression of wisdom and humor. Eight years later, on Franklin's recommendation, Houdon came to the United States to model a sculpture of George Washington.