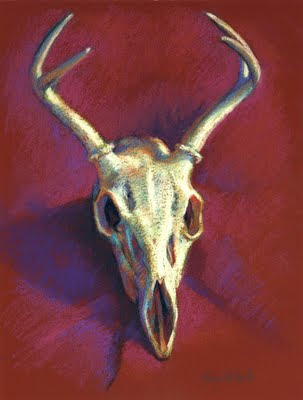 Memento Mori, pastel, 12 x 9" SOLD One of the skulls that either my husband or I have found and cleaned up over the years. I guess its an artist thing...at least this artist. I have always been fascinated with anatomy. I used to study my father's manuals from when he was a medic in World War II. I believe all the copying of skeletons and muscles helped me to develop tremendously in portraiture. On this particular piece, I was mostly concerned with painting the light and not the minutia of the skull. I was going for drama with the color. It was sad to me that this healthy young buck was shot and ran off to die, undiscovered until he could not be eaten. My husband came across his corpse while taking a leisurely walk in the woods and brought home his head. I find his skull both beautiful and disturbing, just like this story.
2 comments
Read more 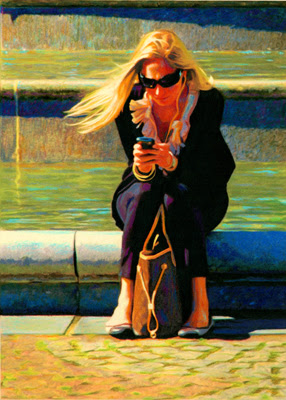 Pulse of New York , Color pencil on paper, 7 x 5" SOLD Yet, another Daily Paintworks Challenge! I love doing figures, and I have already done an oil painting on this theme, All A Twitter . Many of you have commented on the use of my color on the DPW site. I love color, it is music for my eyes! New York is pretty drab, but definitely an exciting place. Color is what excites me and is a good metaphor for the sounds, smells and intensity of the city as well as the look in this woman's posture and face. Here is my second version in acrylic: Pulse of New York 2 , Acrylic on panel, 7 x 5" SOLD I haven't worked in acrylic lately, other than demonstrating for my students. Thought I'd give in a whirl! I used a limited palette and like the subtle difference in the color scheme.
8 comments
Read more

Two of a Kind 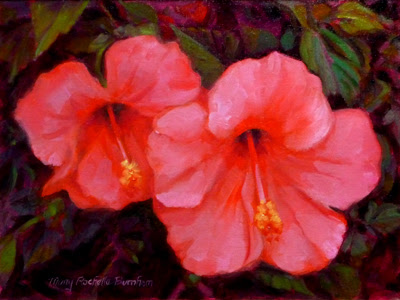 Two of a Kind , Oil on panel, 9 x 12" SOLD I was fortunate to be able to take my mother to Bermuda several years ago, prior to her illness that took her from me. I photographed these intensely colored flowers growing on an old stone wall. A apt metaphor for our relationship. I can hear her now, "Mary, I like your flowers...they will look great on my wall!"
4 comments
Read more

Elvis Is In The House 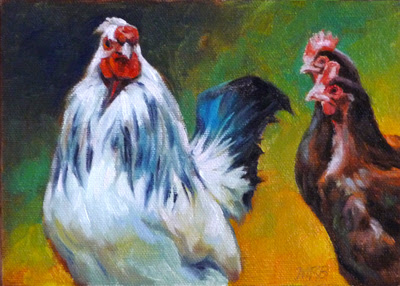 Elvis Is In The House , Oil on panel, 5 x 7",  a vailable Last year while visiting some friends, I took photos of their chickens. I figured that one day I'd get around to painting chickens because they look cool and taste great! Well, as you can see, our friend had some rather plain, drab hens and then this magnificent bird. I don't know what breed this is, but he really reminds me of 70's Elvis, in his white jumpsuit, a bit bloated and really strutting his stuff! Those chicks are his adoring fans.
6 comments
Read more

Missed You For Tea 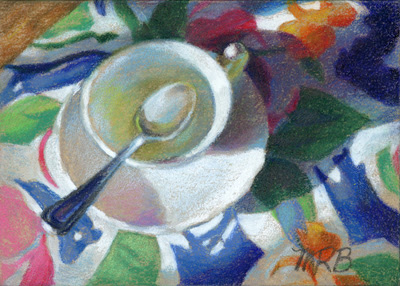 Missed You For Tea , color pencil, 2.5 x 3.5", available  I entered this miniature into The Color of White Challenge, posted by Susan Abbott on Daily Paintworks. It is my second piece. My first sold this past Thursday. Missed You For Tea, although small, was a complicated piece that took approximately four hours to draw.
2 comments
Read more

A Bike Too Big 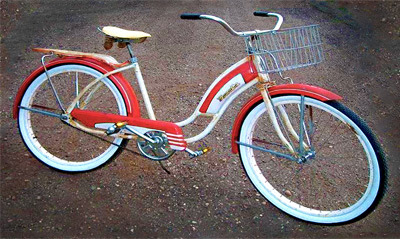 My Big Red Bike I was twelve years old and other than a tricycle as a toddler, I had never owned a bike. Even worse, I couldn't ride one. I wanted more than anything to enjoy the freedom of riding a bike; going long distances in less time, getting out of the neighborhood, exploring new places. Then, out of nowhere, a friend of the family gave me their daughter's old bicycle. A red bike with fat tires, heavy and clunky and very BIG. Hey, I didn't care that it was 'retro', I figured that this thing was going to crush me the moment I fell off considering that I couldn't balance. I would try and I would be bruised, perhaps more pride than body. Both of my brothers had learned to ride on their friends' bikes and then bought bikes of their own. They didn't teach me. Neither did my parents or friends. Back then, it was something that you learned on your own. If you wanted it bad enough, you did it! OK, but my big bike just seemed too big. I felt humiliati
4 comments
Read more 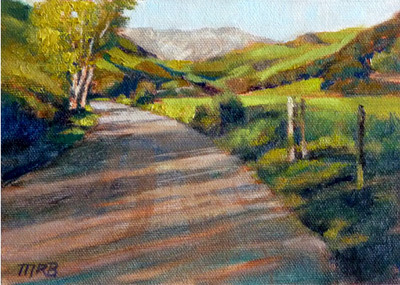 The Road Less Traveled , Oil on RayMar panel, 5 x 7" SOLD This is the companion piece to Headed Toward the Light. This was actually toward the beginning of our hike and in near proximity to my pastel painting, 'Around The Bend'. As you can see, we were still on relatively level ground. When I paint these little pieces, or even gaze at them, they take me back to being there. But, most of all, walking hand in hand with my best friend, my heart, my husband.
2 comments
Read more
More posts