It has been over a year that I have been working on this show and finally this Friday is the opening. I will have five portraits of my chosen subjects and my self portrait, making a total of six from me. It's been quite a journey and I hope that any of you who are in the area will check it out. There will be approximately 55 portraits exhibited from a variety of artists, all original paintings.
Post a Comment
Read more

Holding Onto The Dogs Hay Rolls, oil, 5x7" $109 Sometimes, I don't realize how badly I have painted a piece until later. This is usually not only a piece that does not sell, but also one that starts to make me cringe whenever I look at it. I rarely destroy them, because I believe in trying to learn from my mistakes, and believe it or not, sometimes it takes me a while before I figure out what went wrong! Holding on to the dogs, at least for a while, keeps me humble, too. Eventually, the day comes when as a warm up, I decide to paint over the piece. Sometimes, I sand it down and do something totally different. Other times, I repaint and make the needed improvements to the original painting. Then, this time, I kept the theme, and even the location, but changed the view to something I like better. Here is the original painting: Both images are from an afternoon as the clouds were building in the heat. The first was as a storm was coming in and has more edge to it. The end result is a calme
Post a Comment
Read more

April 24, 2015
Thank you, Sara, for your permission to share this on my blog! Robert & Sara Genn Twice-Weekly Letter -- Insight and inspiration for your artistic career. My bad boyfriend Dear Artist, On last night's flight from New York, I read Amy Poehler's memoir, "Yes Please." An actress, writer, director and producer, Amy describes the distinction between that thing you do as an artist and your career as one. "Creativity is connected to passion -- that light inside that drives you." On the other hand your career, writes Amy, is simply a series of opportunities and jobs, and should be treated with some ambivalence. "Learn to let go of wanting it. Treat your career like a bad boyfriend." I'm pleased to report that I am the top earner of rejection letters amongst my peers. My early twenties were spent painting, writing impassioned cover letters and compiling slide packs for galleries of international repute. In theatre, this is called a "cold
Post a Comment
Read more 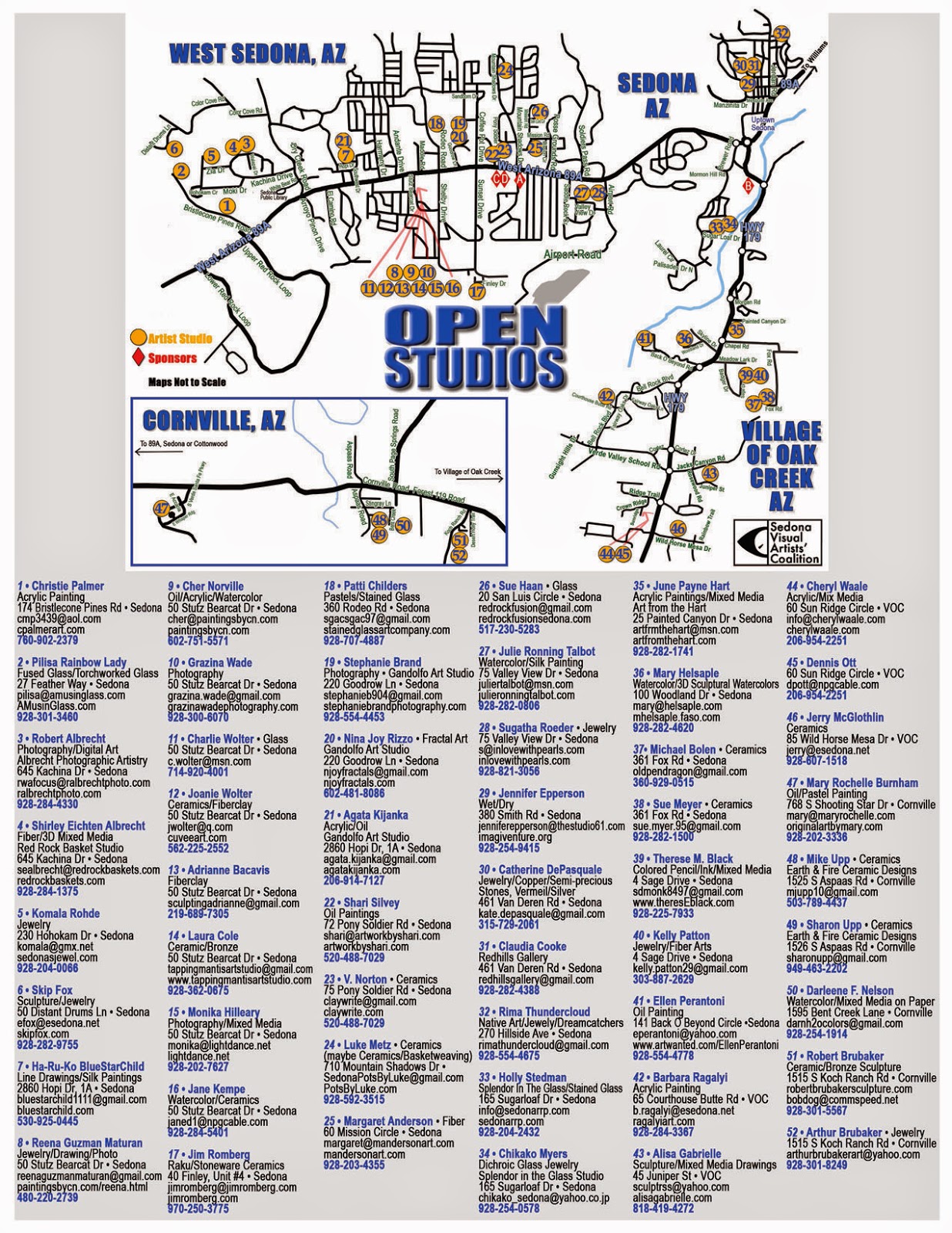 This free event is the annual celebration of the arts in the greater Verde Valley and runs from 10 am to 5 pm daily, April 24-26.  The tour provides thousands of visitors a  unique opportunity to meet the artists and see the studios in the greater Verde Valley. There will be over 50 artists participating, working in a variety of mediums, such as:  ceramics, painting, fiber, photography, jewelry, watercolors, and sculpture. This is a self-guided tour allowing visitors the opportunity to meet with artists in their daily  work spaces, ask questions and gain a deeper understanding of the creative process. Please come out and see me, I am at studio #47. Maps and artist information is available on-line now at: http://sedonaartistscoalition.org/openstudios/osmap.html .  Printed maps and brochures will be available in a number of Sedona area businesses and hotels by mid-April.  If you  have further questions, you can contact Mike Upp at mjupp10@gmail.com or 503.789.4437.
Post a Comment
Read more 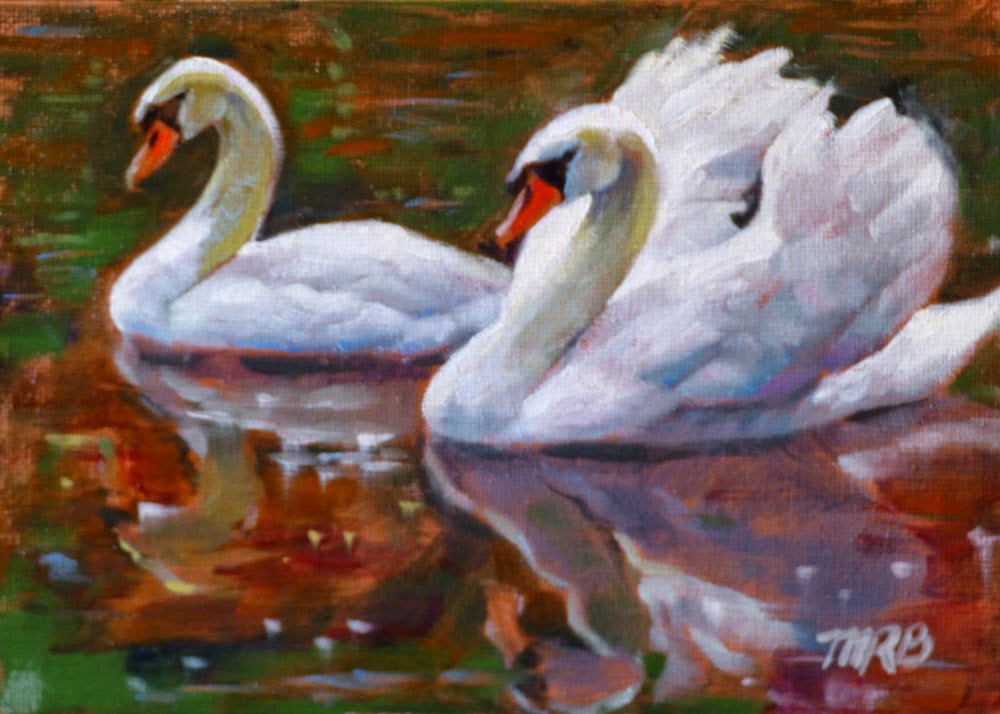 Swans , oil, 5x7", SOLD Thought I do the Daily Paintworks Challenge , today. I took the original morgue file photo and altered it considerably in Photoshop. I can view photos from a flash drive on my TV because it has an USB port. Then, I just work from the monitor and never have to print out my reference. This is my new way of working, if I need to work from a photo. I love it. My TV screen is a 43" and I can zoom in on a photo, too. Sometimes, I just love technology.
Post a Comment
Read more 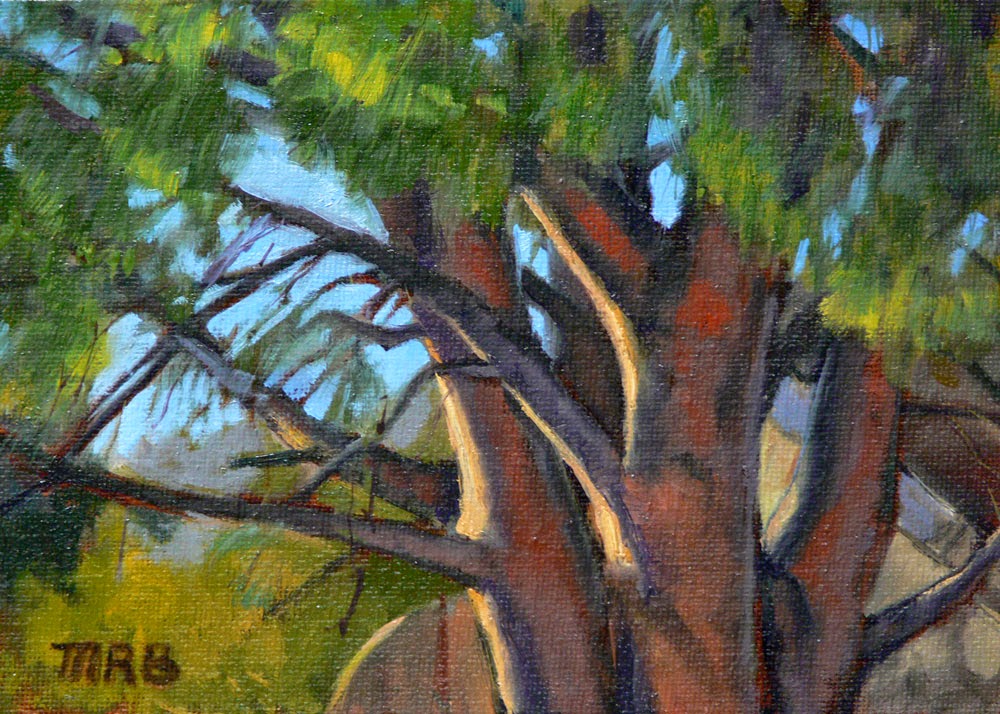 Backyard Trees, oil, 5x7",  Available These trees are in a neighbor's yard that I see from my studio window. I enjoy how the evening light dances upon them. It's the best of both worlds, when I can paint an outdoor scene from life, in the comfort of my studio.
Post a Comment
Read more 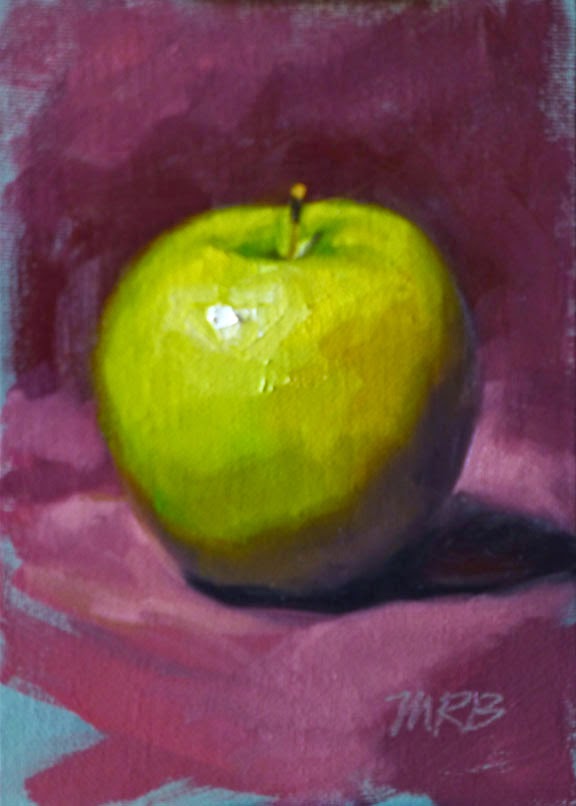 Granny Smith , oil, 7x5", SOLD I try to eat an apple a day. Fuji apples are my favorite for eating. Crisp, juicy and sweet. I love the form and color of this granny, especially with the purple drape. I am going to slice her up and eat her on my salad...yum.
5 comments
Read more
More posts